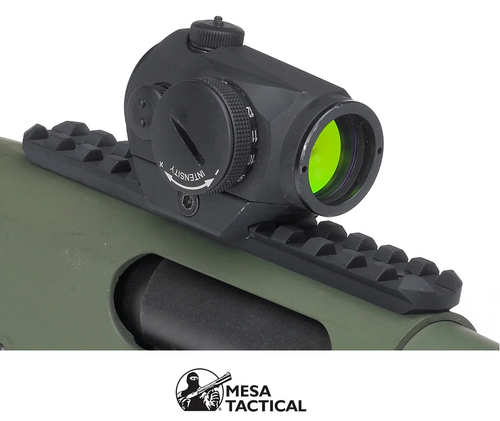 Receiver-mount rails are made to be mounted onto the receivers of Remington, Mossberg, and Benelli shotguns with pre-drilled and tapped mounting holes. These rails can also be used with weapons that are custom drilled and tapped. All Mesa Tactical Picatinny rails adhere to the MIL-STD 1913 specification for firearm accessory rails. It is machined from 6061-T6 aluminum alloy, then bead blasted and Type III hard anodized for a rugged, flat black finish. Mesa Tactical Picatinny rails include all necessary mounting hardware. Receiver mounted rails for Remington are available in 5" and 8 1/2" inches.

Mesa Tactical provides two methods for mounting Picatinny rails to tactical shotguns. For Remington shotguns, we offer the Mesa Tactical Saddle Rail with integrated SureShell shotshell carrier, which mounts to both side of the receiver and wraps around the top.

Saddle Rails are 6061-T6 aluminum brackets that wrap around the top of the shotgun receiver and feature a four-, six- or eight-shot SureShell shotshell carrier yoke on the left side of the receiver. The factory trigger pins are replaced by an internally threaded steel pin (in the rear) and paired Chicago screws (up front), to which both sides of the saddle rail are securely bolted. The saddle rail is Type III anodized for a rugged surface finish.

Our Saddle Rail is specially contoured to allow operation of a semi-automatic bolt on the right side of the receiver, so it can be installed on Remington 1100 and Remington 11-87 semi-auto shotguns as well as Remington 870 pump shotguns. The rail is notched at the rear to accommodate Scattergun/Wilson style ghost ring sights, and extends to the front of the shotgun receiver 5 inches.

No gunsmithing is required to install. Minor fitting of fasteners may be necessary.

MADE IN THE USA