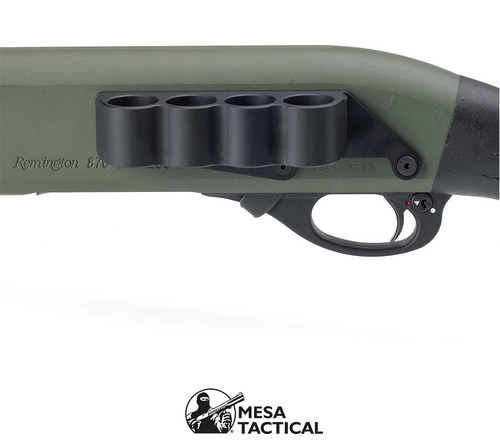 The principle difference between one model of SureShell and another, aside from capacity, is the backing plate, which is designed to mount the carrier assembly on a particular model of shotgun. Side-mount SureShell shotshell carriers for Mossberg , Remington and Benelli M1 shotguns use the trigger group pin holes to secure the assemblies to the weapon; the Benelli M2 Tactical, Benelli M4/M1014, Benelli SuperNova Tactical and some Mossberg 500/590 versions take advantage of the factory-tapped rail mounting holes in the tops of these shotguns and include integrated Pictanny optics mounting rails; another version with an integrated rail is the saddle-mount design for Remington; SureShell Carriers for M4 SOPMOD stocks feature special hardware for attachment to these buttstocks; Adapter Mount SureShell shotshell carriers are designed to be attached to Mesa Tactical Telescoping Stock Adapter accessory mount points.

MADE IN THE USA